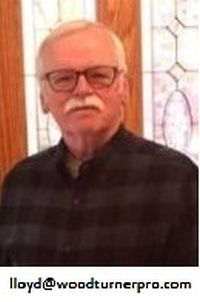 My foray into the world of wood started on my wedding day. My Father-In-Law gave me a radial arm saw as a wedding present and I wasn’t sure what it was and certainly didn’t know what to do with it. He said that if I was going to marry his daughter I needed to build her some furniture because we had a home that was practically void of furniture. So I learned how to use it and found that I liked using it. Soon I had made a dining table, a full bedroom set, coffee tables, etc. One thing bothered me, though – when I would tell people that I was a woodworker, their first question was, “Do you have a shop?” And when I said yes, their next question was, “Do you have a lathe?”

After hearing this question one too many times, I decided to get a lathe, and once again, I didn’t know what to do with it. I liked using my table saw, though, and so I decided that segmented woodturning would let me be mostly a woodworker who eventually had to do some turning. My first project was a disaster because my bowl design did not leave enough overlap of wood between two of the rings.

This failure caused me to turn to my other passion – software. I figured that if I had a piece of software that let me visualize a cutaway view of the bowl and then have that software give me the cutting instructions for making the rings, there was a chance of success. The year was 2000 and later in the year, I released my first piece of software which I named Woodturner PRO. I had designed it and my friend, Tom Denny, did the coding.

Seventeen years later, I’ve recently released my fourth piece of software and have retired to work full time (well, mostly) on the business which has sold more software than all other solutions combined.